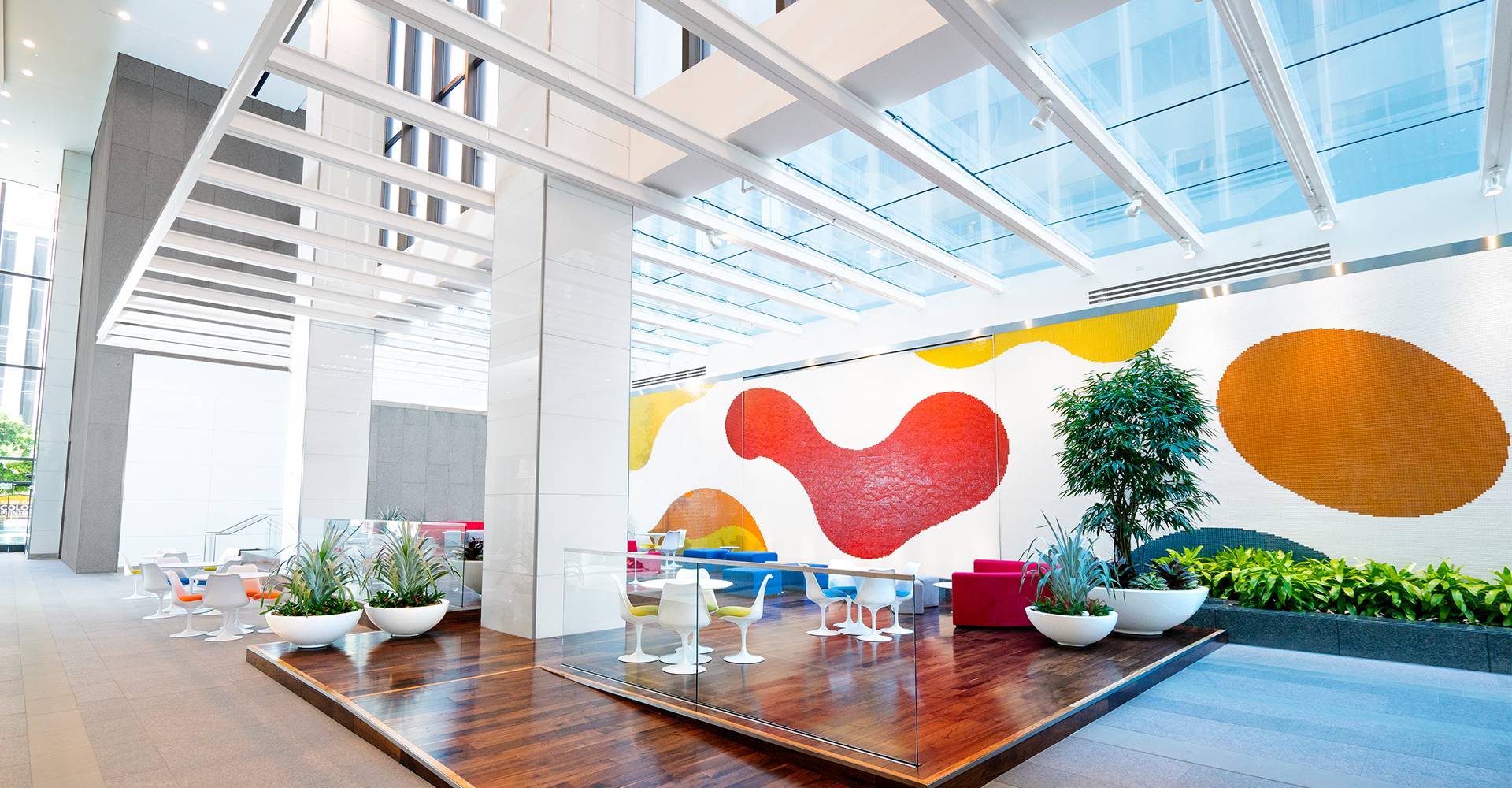 AON Center is the third tallest office tower in Downtown Los Angeles offering remarkable and essentially unobstructed views. Floor-to-ceiling windows allow for abundant natural light and large rectangular floor plates allow for a combination of perimeter offices and creative, open configurations. The property is well located in the midst of a dramatic renaissance as a result of major investments made over the past 15 years in public and private projects, including numerous residential towers, transit infrastructure enhancements, expanded entertainment/hospitality venues and new retail, especially restaurants. With significant additional investments underway, Downtown is establishing itself as a dynamic live/work/play urban center. Tenants at the building benefit from proximity to the prestigious California Club across the street and the Jonathan Club one block away; “Restaurant Row” along 7th Street; Fig at 7th retail center three blocks away; The Bloc, an open-air lifestyle retail center located one block to the south; and the Wilshire Grand Center, an upscale mixed-use tower with a 900-room InterContinental hotel, expansive conference and spa amenities, office, retail, and cutting edge restaurants.

The property occupies two thirds of a city block between Wilshire Boulevard and West 6th Street along South Hope Street in the Financial District. It has prominent entrances for both pedestrians and vehicles on Wilshire and 6th Street, which offers convenient access to and from the Harbor Freeway (Highway 110). The 7th Street Metro station is located a short block south of the property. By 2020, all LA Metro trains will pass through 7th Street making it a direct stop for commuters from all over the LA region and the main transfer station for the entire system.

The conference center is available to our tenants at no charge. There are two meeting rooms: Auditorium and Training Room.

Auditorium has stadium seating for up to 90 people. It has a fully integrated audio visual system with video conferencing, LCD projector, Blu-Ray player, wifi, and speaker system with microphones.

Training Room can seat up to 40 people classroom style. Arrangements can be made through the building office for audiovisual equipment.

Location: Bank Level in the Atrium

The concierge is available by phone 9am – 12:30pm Tue-Fri and onsite every Thursday.

An instructor from City Wellness holds a  Pilates class every Wednesday from 12pm-1pm for our tenants. The class is $10, paid to instructor, and bring your mat.

The process is simple: Drop off dry cleaning or wash & fold garments in an available locker located on the building’s mezzanine level on the east side. Simply place your order using the app. After delivery, you will receive a text with access code and locker number to receive your freshly cleaned garments.

Complimentary movies on DVD are available for check-out for all monthly parkers. Selections include new releases and all-time favorites.

AON Center has two parking garages totaling 1,028 parking stalls. There is one onsite subterranean garage located on LL2 Level for monthly parkers as well as a second garage located at 637 Wilshire Boulevard, which is connected to the building by a vehicular and pedestrian tunnel.

Zingle Valet Parking Service
Zingle is a convenient way to send the valet parking team a request. Instead of calling for a car to be pulled up or making this request in person and waiting for your car, you may make requests via text message to 424 348 7525.  We recommend sending the text five minutes prior to requiring your car.

Window Washing Stations
The garage is equipped with several window-washing stations for tenant use. We ask all parkers to please comply with the ten-minute space limit.

The 7th Street Metro station is conveniently located a short block south of the Property. By 2020, all LA Metro trains will pass through 7th Street making it a direct stop for commuters from all over the LA region and the main transfer station for the entire system.

We have a collective of creative business suites available for lease with move-in ready accommodations.